The course focuses on the in-between spaces of downtown Cairo. It aims at exploring the concept of "in-betweeness" in both the physical, socio-cultural and symbolic aspects. Students were asked to envision more inclusive (democratic) public space in downtown, collectively developing a network of pedestrian paths of not only cafes and shops, but of art spaces, performances and greenways.
The semester began with an exploration of the urban context, its history, socio-economic make-up, and current approaches to, as well as potential risks associated with plans for the "Revitalization of Khedival Cairo." It included an extensive documentation and analysis of such urban typology: as historic passages, set-backs, pedestrianized streets and other left-over spaces. Students started with a general model 1:2000 of the urban fabric, then each group (10 groups of 2) studied one super-block on scale 1:500, collectively constructing an overall model of downtown. Exercise on this scale concluded with general strategies for intervention and scenarios for development.
In the second half of the semester, each student was asked to choose one specific in-between space within his/her group super-block. Working on a 1:50 model, each student, first, developed his/her own brief, including a conceptual approach, a written program in response to the needs on their local communities, and a set of spatial relations and techtonic language. Then students engaged in multiple renditions of their interventions on the model, supported by other media (sketches, 3D models, photo-montage, and short films). Some students who have reached an advanced stage of spatial development were encouraged to explore one single element of streetscape (bench, shed, screen, lighting feature, etc.) in scale 1:20 or 1:10.
The course emphasizes the context-based urban design approach, taking desires and aspirations of local communities seriously and critically. Several design review sessions, along with the models were organized in some of downtown in-between spaces, engaging local users/owners of such spaces. The extensive use of model as a design tools (3-4 models in a 10-week semester) shifts the focus from drawings and 3D modeling and is reflected in the format of final presentation. 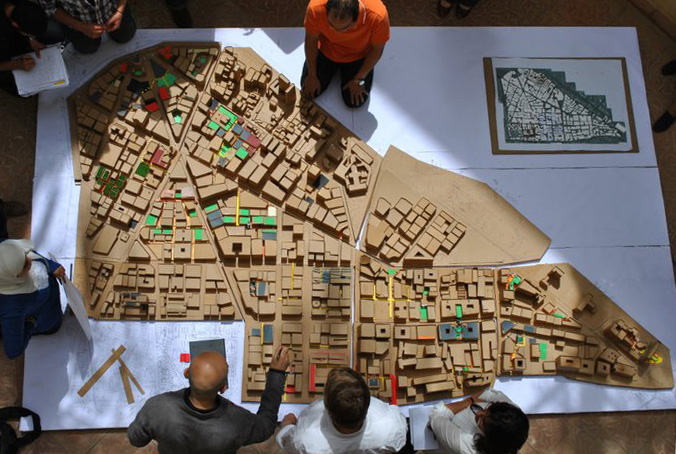 < Understanding Cairo: The Logic of a City out of Control - Book Review Cairo
Schopenstehl Studios Hamburg >